This post will discuss how the cardioid microphone works and its benefits. We’ll also provide a few tips on how to use it effectively. So whether you’re looking to improve your audio recordings or want to know more about this popular microphone type, this post is for you. What is a cardioid microphone?

A cardioid microphone is a mic that only picks up sounds in front of it. This front-focused pattern is great for live performances and other situations where noise reduction and feedback suppression are needed. It lets the microphone be pointed directly at the source of the sound while isolating it from background noise. Cardioid microphones vastly outshine mics with other polar patterns.

If your in the market for a new mic, below are three of the most popular and best reviewd cardioid microphones you can buy right now. 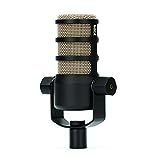 How does a cardioid microphone work?

A cardioid microphone captures sound in a single direction, or “cardioid.” This allows the microphone to pick up less sound from all directions, which makes it better for recording vocals, instruments, and other acoustic elements. This is because the cardioid microphone focuses its sound waves on a single point, so sounds coming from other directions don’t mess up or distort the sound.

For a cardioid polarization to occur, the diaphragm’s back side must be subjected to airborne sound waves. This results in a movable diaphragm that responds to changes in front-to-back sound pressure.

A cardioid microphone has a diaphragm that only moves in one direction, so sound can come in from any side. The diaphragm flexes and extends as the pressure on its front and back sides changes.

Manufacturers of microphones use clever ways to change the phase (and maybe the amplitude) of sound waves before they reach the back of the diaphragm. For example, they might put an acoustic labyrinth in the back of the capsule. So, if the same amount of sound pressure is put on both sides of the microphone diaphragm, as explained in the previous bullet points, the microphone won’t send a signal.

Characteristics of a cardioid microphone

Knowing the cardioid shotgun mic’s sound-recording capabilities is helpful if you plan on using it. For a general understanding, we have listed six common points below.

For cardioid polarization to occur, the diaphragm’s back side must be subjected to airborne sound waves. This results in a movable diaphragm that responds to changes in front-to-back sound pressure.

The 180-degree null point is a hallmark of the cardioid microphone pattern. The elimination of noise from behind aids in navigation. Easily block out unwanted sounds by directing the microphone to the desired source. The 180° null point is most often seen on stage monitors.

Cardioid mics work best when they are oriented away from the stage monitor. Vocalists can increase the gain on the mic pointed at them without getting feedback by pointing it away from the monitor.

The on-axis cardioid pickup pattern is better because it is the most sensitive one-directional pattern. It also pays no attention to its hind end. As the cardioid polar pattern angle moves away from 0 degrees in either direction, the sensitivity decreases until the rear null point is reached. Its ideal cardioid configuration achieves a 6 dB attenuation at 90 and 270 degrees.

If we use -6 dB spots as our acceptance angle reference, the cardioid mic has a 180° acceptance angle. This means the microphone will always pick up sound in a 90-degree area on either side of its on-axis line.

When sound pressure comes from all directions, the diaphragm is more sensitive to sharp sounds. Vocal plosives are short, sharp bursts of air produced by some consonant sounds. Explosive energy is short-lived and can make the sound pressure in the front and back of the diaphragm very different. When the diaphragm/capsule overloads because of the quick but significant change in pressure, loud “pops” can be heard in the mic.

This method can get a close mic on a single source when there are no other sounds nearby or behind it. If you can, put the “unwanted” sound sources behind the microphone, close to the point where the cardioid pattern stops picking up sound from the back.

When the cardioid microphone is put in the right place for live sound reinforcement, it can have a high gain-before-feedback. This is because the microphone has to be pointed away from any speakers or monitors to make use of the rear null point.

What are the benefits of using a cardioid microphone?

Using a cardioid microphone has several advantages. Among them are:

When should you use a subcardioid microphone?

The cardioid shotgun mic’s unidirectionality and rear-side rejection make it useful in many applications.

When should you avoid using a cardioid microphone?

While there are many reasons you would want to use a cardioid microphone, there are some circumstances where you’d want to avoid it.

If you want even more tips and insights, watch this video called “What is a Cardioid Microphone [What you Should Know About Cardioid Mics]” from the Zim Mics YouTube channel.

Do you still have questions? Below are some of the most commonly asked questions about cardioid microphones.

Is a cardioid microphone good for vocals?

Yes! The advanced cardioid pickup pattern will help keep the background noises from getting in and causing feedback. These characteristics are necessary for a live mic, so if you’re searching for a voice mic for the stage, this is probably the best option.

Where should I place my cardioid mic?

To find the optimal placement for a cardioid microphone, cup your hands over one ear to create a stereo headset while listening tot he playback. You’ll want to move around the player or sound source to locate the sweet spot where the instrument’s frequencies are evenly distributed.

What is an acoustic labyrinth

The acoustic labyrinth is an open-ended tuned pipe in a microphone. When the wave from the speaker reaches the end of the pipe, it expands into the listening area, generating an abrupt pressure drop that reflects back through the pipe as a rarefaction to the speaker.

We hope this blog has helped you understand a cardioid microphone. As well as how to use it effectively.

This article covered what a cardioid microphone is, how it works, and the characteristics of a cardioid mic. Here are some key takeaways:

So, do you find cardioid microphones convenient to use? And did I cover everything you wanted to know? Let me know in the comments section below (I read and reply to every comment). If you found this article helpful, share it with a friend, and check out my full blog for more tips and tricks on music production. Thanks for reading, and never stop making music.