This blog post will explain a boom mic, its various uses, and how you can get the most out of it. So whether you’re new to mixing or just curious about boom mics, this post is for you. What is a boom microphone? A boom mic is a microphone on the end of a long, flexible pole with a narrow picking pattern. In film and video, these microphones are indispensable. They are directional (they pick up sounds where they point and reject off-axis sounds). Boom mics are versatile because they may be moved around by the operator.

What is a boom microphone?

In cinematic contexts, a mic boom is a pole or pole that holds microphones, so, generally speaking, a boom microphone is any microphone that has a boom connected to a boom.

Therefore, many different types of microphones meet our wide definition of a boom mic. When people in the audio and film industries say “boom microphone,” they usually talk about a microphone made for video production.

If you want to try out a microphone boom arm, check out these highly-rated one-below. 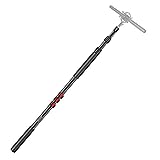 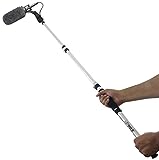 Why do booms use shotgun mics?

Shotgun microphones are a type of microphone whose polar pattern is particularly directional. A directional microphone picks up sound from the direction it is pointed and mostly ignores noise from any other direction. Because of this advantage, they are primarily used in film and TV.

Shotgun microphones may be either dynamic or condenser, but they are virtually usually constructed with a long (8 to 24 inch) tube projecting from the front. This tube’s side features a number of holes or slots that serve as a phase-cancelling mechanism for sounds emanating from the rear of the microphone.

Directly in front of the microphone, sounds enter each of the holes or slots sequentially and therefore accumulate in phase before reaching the diaphragm. When sounds from the rear enter the diaphragm in reverse order, they are out of phase and provide little or no output. The mic becomes more directional as the length of the tube increases.

What is a boom microphone used for?

Boom mics have many different use cases, including:

The most common mental picture of a boom mic in action is on a film set. The following characteristics make shotgun-type boom mics standard equipment in the film industry. Due to their direct nature, they can only listen to what’s happening directly in front of them. Their small weight and durability make them ideal for placement atop a boom pole.

It is common practice to use permanently installed boom mic configurations in the studio, particularly for holding overhead drum mics. Overhead microphones are commonly used when recording drum kits in studios. The boom arms of the stands can be set up outside the drum kit, allowing the microphones to be positioned directly over the drum set.

If you want even more tips and insights, watch this video called “Film Craft 107: The Location Sound Mixer – 8. Operating a Boom Mic” from the macProVideoDotCom YouTube channel.

Do you still have questions? Below are some of the most commonly asked questions about boom microphones.

What is the difference between a boom mic and a regular mic?

Boom is a generic term for any stand (i.e., an overhead mic stand commonly used in film shoots). Any microphone, from directional to omnidirectional to binaural, may be mounted on a boom, so you can record anything you need to.

What cables do boom mics use?

Boom microphones usually have long XLR cables that connect them to the mixer or recorder, or they may use “duplex” cables that have both a microphone input and a headphone output for the boom operator. It has been the best for many years, and because it sounds better than wireless options, it is often used instead.

How far away should a boom mic be?

Even with the cheapest shotgun mics, the best sound quality is achieved at a distance of three to four feet, but these mics can record up to six to ten feet away. The standard shooting distance for interviews is seven to 10 feet.

There you have it, folks! The boom mic is not a new phenomenon but has been used by celebrities and music artists for years. So now that you know about the boom microphone, how it works, and its various uses, use it to sound your best!

So, do you prefer to use a boom microphone? And did I cover everything you wanted to know? Let me know in the comments section below (I read and reply to every comment). If you found this article helpful, share it with a friend, and check out my full blog for more tips and tricks on music production. Thanks for reading, and never stop making music.