What is a condenser microphone?

A condenser microphone is similar to a capacitor but with additional features. A capacitor is a passive electrical component that temporarily stores energy in an electric field. A capacitance in a capacitor is created by two parallel plates. As the distance between two things gets smaller, their ability to hold an electric charge, or capacitance, goes up.

The diaphragm of a condenser microphone is suspended from a solid plate and weighs very little. The diaphragm moves in response to sound wave pressure. When sound waves strike the diaphragm, it vibrates, changing the distance between the plates. The resulting capacitance change represents the electrical representation of the acoustic energy from the input source. 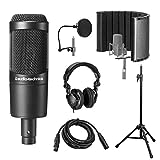 How do condenser microphones work?

A condenser microphone picks up sound with a membrane called a diaphragm coated with a conductor, like gold. This membrane is attached to a metal plate that forms the device’s rear. The diaphragm vibrates very near the backplate when sound waves strike it.

Simply put, a microphone records the pressure fluctuations in the air caused by the membrane’s vibration against the capsule’s metal backplate (the sound waves). To record the difference in pressure between the diaphragm and the backplate (capacitance), a voltage is applied, amplified, and then turned into a representation of sound waves in the recording device or software.

What are condenser mics used for?

For the most part, condenser microphones are the go-to for capturing a human voice. Because the human voice makes a sound at a level that works well for most recording situations, the mic picks up a lot of information and does a good job reproducing natural tones.

Due to their sensitivity, condenser microphones may also record environmental noise. As a result, making sound effects produced on a soundstage seem more realistic is a common practice in the film industry.

The different types of condenser microphones

Condenser microphones come in two basic varieties: large-diaphragm and small-diaphragm. Each is unique in some aspect of audio recording and is used in somewhat different ways.

Small-diaphragm condenser mics are often long and thin, and their diaphragms are less than an inch long. Because of their small size, they are sometimes called “pencil microphones.” Most of the time, the diaphragm of a unit like this will be facing forward, and the sound source will be pointing up into the top of the microphone.

Although small-diaphragm condenser mics may be handled with a hand, many studios prefer to record with them on a desk or in a rack. Little diaphragm microphones readily capture transients and other high-end noises.

What are the pros and cons of using a condenser microphone?

The high sensitivity of condenser capsules allows them to pick up nuances and textured tones that other microphones would miss. This is especially helpful when recording voices or voiceovers, but it may also help when recording acoustic instruments that need to be recorded with a good sense of tone.

When set to an omnidirectional polar pattern, a condenser microphone is also a great way to record sound in a group. Since condenser microphones are not often used for on-the-go recording, they may be set up in a big recording studio or voice booth to pick up clear sounds from all directions. This means fewer tracks to manage in post-production and more time spent recording with a single device.

The fact that a condenser mic is sensitive to sound may be both its best and worst features. Their hypersensitive capsules make them susceptible to distortion when exposed to excessively loud sounds. Therefore, a condenser microphone for recording loud instruments or amplified signals is highly recommended.

They often struggle when recording sound in a concert or other live setting. Speaking to a large audience, singing on stage, and doing play-by-play commentary all call for using a handheld microphone. Because of its sensitivity, a condenser microphone will likely pick up ambient noise. Still, it can also pick up noises made by the user while handling the device, which can compromise the quality of a recording.

If you want even more tips and insights, watch this video called “What Is a Condenser Microphone?” from the Sweetwater YouTube channel.

Do you still have questions? Below are some of the most commonly asked questions about condenser microphones.

Which is better, condenser or dynamic mic?

It depends on your use. Condenser microphones record softer sounds and higher frequencies, while dynamic microphones are better suited to recording loud, powerful sounds (such as drums or loud vocals), especially in a live setting.

Can you use a condenser mic for live vocals?

Since a condenser mics frequency response is typically approximately 50 Hz–20 kHz, it is optimized for live voices. It removes the low-end boom and closeness effect that can happen when singing in a small space. However, Condenser microphones are typically less rugged than dynamic microphones and may not be suited to applications like a live performance.

What’s the difference between a dynamic and a condenser microphone

We hope this article helped you understand a condenser microphone and why many professionals use it when recording their tracks. Just keep its durability in mind too! In the end, it’s all about your sound quality and how you perform. So, before you purchase, try out different types to find the right type of condenser microphone for your needs.

So, does a condenser microphone suit your needs? And did I cover everything you wanted to know? Let me know in the comments section below (I read and reply to every comment). If you found this article helpful, share it with a friend, and check out my full blog for more tips and tricks on music production. Thanks for reading, and never stop making music.