In this post, I’ll talk about MIDI controllers and keyboards and whether a MIDI controller can replace a traditional keyboard. So whether you are new to mixing and recording or a seasoned pro, this post is for you. Image of a person using a midi controller a speaker and a computer. Source: Amin Asbaghipour, Pexels

Can I use a MIDI controller as a keyboard? Yes, so long as you have an external audio output device. A MIDI controller can’t be used without one. A keyboard is a standalone piece of equipment that can be used without another device because it has internal speakers. You might also want a MIDI with enough keys to play comfortably.

Contents
1. What is a keyboard?
2. What is a midi keyboard?
3. Can I use a midi controller as a keyboard?
4. Which of them is ideal for music production?
5. Which will meet your needs better?
6. Frequently asked questions (FAQ)
7. Conclusion

What is a keyboard?

A keyboard is a group of keys or levers on a musical instrument that can be pressed together to make music. Most keyboards have a mix of larger, longer keys and smaller, shorter keys that repeat each octave. This makes it possible to play all twelve notes of the Western musical scale. The phrase “normal keyboard” encompasses various devices, including:

However, audio output from the keyboard is optional. As far as we’re concerned, a keyboard is a keyboard as long as it makes sounds without the aid of another device (with the exertion of its built-in speaker). Many professional and semi-professional keyboards (including certain grand pianos and huge synthesizers) do not have built-in speakers and rely on external devices to output sound.

What is a midi keyboard?

A MIDI controller keyboard is not a musical instrument that can be used independently. Thus, A MIDI keyboard or controller makes no audible noise. It only transmits MIDI data to an external device that can generate audible output. You need a MIDI cable to connect your MIDI keyboard to the performance device you want to use.

The Musical Instrument Digital Interface (MIDI) standard is a set of rules for how electronic musical instruments can talk to each other about musical information like note names, lengths, volumes, etc.

If you shopping around for a new MIDI controller, check out these top-rated controllers. They are some of the best don’t he market, packed with features, and won’t break the bank. 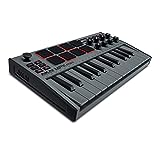 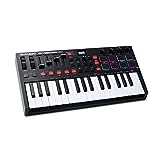 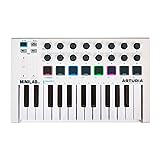 Can I use a midi controller as a keyboard?

Most MIDI controllers are keyboards that send keyboard information to an external device, usually a computer. Because of this, a MIDI controller can only be used with other instruments or devices; it can’t be used on its own. That may sound like a major drawback, but a MIDI keyboard has several benefits.

Some of the many functions that MIDI controllers can perform are faders, pans, and aftertouch. Unfortunately, you must pay more to use these premium services.

Drawbacks of a MIDI keyboard

Now that we’ve looked at the upsides, let’s talk about the drawbacks of using a MIDI keyboard:

Now that we’ve looked at the upsides, let’s talk about the drawbacks of using a keyboard:

A keyboard is a standalone piece of equipment that can be used without another device because it has internal speakers.

There are, however, drawbacks to keyboards despite their usefulness, and they are as follows:

Which of them is ideal for music production?

Consider your current level of expertise and your goals. A MIDI interface will do if all you want to do in a digital audio workstation is write music. However, if you are interested in music and want to learn to play an instrument, the keyboard is your best bet.

You should also know that not all MIDIs and keyboards are created equal, and each has unique features. Your budget and the features you think you’ll need from the device are also things to consider. But a MIDI controller is the best choice if you only want to use the device as an input method when making music.

Which will meet your needs better?

A MIDI controller is great if you want to make music on a tight budget. This, though, only works if you already have a computer and a DAW to use with your controller.

A MIDI controller is the best solution if you want precise control over your sound’s volume, tone, and other parameters. The item is a musical synthesizer that connects to your computer through a USB cable. But it knows that their playability and sound quality fall short of a piano.

If you’re searching for something comparable to the piano, keyboards are probably what you’ll buy. What’s great about today’s keyboards is that they’re responsive to how hard you press the keys and how long you hold them down. Some keyboards also benefit from functioning as MIDI controllers, greatly expanding their usefulness.

If you want even more tips and insights, watch this video called “Use Your Digital Piano/Electronic Keyboard As A MIDI Controller | Audio Mentor” from the Reuben Chng YouTube channel.

Do you still have questions? Below are some of the most commonly asked questions about whether a MIDI controller is used as a MIDI keyboard.

Can a MIDI produce its own sound?

Since a MIDI controller is just a keyboard that sends and receives MIDI data, you will need to get sounds from somewhere else. If you connect to a computer, you can use software to modify the sounds you’ve made.

Can a MIDI controller be used as a piano?

No, it’s not a standalone unit that can produce piano-like sounds on its own; rather, it works in tandem with other tools, such as a virtual instrument or digital audio workstation (DAW).

Can you use a MIDI controller without a computer?

No, you don’t need a computer to use a MIDI keyboard. However, MIDI keyboards don’t produce any sound on their own; rather, it generates MIDI signals and sends them to a linked device that processes and produces audio. so you will need to link it to some speakers or a computer with speakers.

You should get both if you can, since each has pros and cons and is best for different kinds of musical expression. If you can’t buy a keyboard for some reason and need to use a MIDI controller as your main instrument, don’t worry. You can still make amazing music with this affordable yet powerful tool. Follow the tips we discussed above and prepare to unleash your creative side!

This article covered what a regular keyboard is, what a midi keyboard is, and whether midi controllers can be used as keyboards. Here are some key takeaways:

So, do you prefer to use a MIDI controller as a keyboard? And did I cover everything you wanted to know? Let me know in the comments section below (I read and reply to every comment). If you found this article helpful, check out my full blog for more tips and tricks on music production. Thanks for reading, and never stop making music.