If you’re a music producer, sound engineer, or just someone who spends a lot of time recording audio, you’re likely familiar with bidirectional microphones. They’re often used in recording studios and by musicians who want to capture the ambiance and spatial audio.

In this post, I’ll answer some questions about bidirectional microphones and give you an overview of their uses. What is a bidirectional microphone?

A bidirectional microphone’s polar and pickup patterns are shaped like in figure 8. This is because the front-facing microphone picks up sound with the same polarity as the one in the back.

If you’re looking for a budget bi-directional microphone. Take a look at the one. 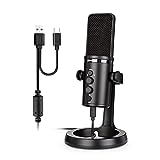 How do bidirectional microphones work?

A bidirectional microphone’s polar and pickup patterns are shaped like in figure 8. It can pick up noises from in the front and behind it, but not from the sides (the ring of silence). This is because it can pick up sound with the opposite polarity as the one in the back.

As a result, you won’t have to deal with any feedback or echoes during your recordings, and you’ll be able to receive great sound from both the front and the back of the device.

Video game consoles and home theater systems might greatly benefit from this feature since they need to capture sound from numerous angles.

What are the characteristics of a bidirectional microphone

There are several distinctive features of a bidirectional microphone.

3. Null points to the sides

Imagine a diaphragm being pushed on from both sides by pressures that are equal in magnitude but opposing in direction. A “null point” is created at the sides of a bidirectional microphone because sound waves cancel each other out.

The proximity effect is usually most noticeable with bidirectional microphones, compared to other microphones. This is because sound pressure might enter the microphone from any side. The difference in amplitude between the two sides of the diaphragm is smaller than the phase difference. As the sound source moves closer to the microphone, the bass response at lower frequencies improves dramatically.

The pressure-gradient idea is at the heart of the bidirectional mic’s operation. Since the diaphragm is porous on both sides, the plosive energy of the human voice can easily cause “popping” by overloading the microphone.

When plosive energy is released from the mouth, the pressure goes up and down quickly, like a gust of wind. Overload and “pop” happen when the pressure on the microphone diaphragm changes quickly and dramatically as the plosive moves around the mic.

At the right distance, when the proximity effect isn’t very noticeable, the bidirectional microphone makes a very realistic sound. If the bidirectional mic is pointed toward the sound source it is supposed to pick up; it will often pick up the early echoes of the room. The sound becomes more “genuine” as a result of this.

The polar response of a standard bidirectional microphone is also highly stable. This means the microphone doesn’t pick up unnatural sounds when used off-axis.

Bidirectional microphones’ front and rear sensitivity lobes are mirror images of one another. This means that traditional “cardioid placement” in live sound reinforcement is not ideal for these microphones. Putting a screen in front of a bidirectional mic will cause massive feedback.

However, placing monitors or loudspeakers directly to the sides of the mic will provide massive amounts of gain before feedback, providing the mic with massive amounts of gain before feedback. However, placing screens out to the side is not very effective. Due to this, bidirectional microphones are rarely used for performing vocals in a live setting.

When should you use a bidirectional microphone?

Below are some situations where a bidirectional microphone could be useful:

When shouldn’t you use a bidirectional microphone?

There are some scenarios where a bidirectional mic will not perform properly. Among these are:

If you want even more tips and insights, watch this video called “Cardioid vs. Omni-directional vs. Bi-directional Mics, Which Should You Buy?” from the Podcastage YouTube channel.

Do you still have questions? Below are some of the most commonly asked questions about bidirectional microphones.

Can you use bidirectional microphones in live settings?

A bidirectional microphone is an excellent tool for enhanced clarity and sound quality. As the name suggests, it can help you get higher-quality audio with minimal noise when recording from different directions. This microphone is not meant to replace your standard microphone, but it can give a good boost if you need it to record better audio quality.

This article covered what a bidirectional microphone is, how it works, and its characteristics. Here are some key takeaways:

So, do you use a bidirectional mic? And did I cover everything you wanted to know? Let me know in the comments section below (I read and reply to every comment). If you found this article helpful, share it with a friend and check out my full blog for more tips and tricks on music production. Thanks for reading, and never stop making music.