Do you have rusty strings? Are you wondering if your guitar will still sound good with corroded strings? You’re not alone. Strings can get rusty very easily due to many factors, but can you play guitar with rusty strings, and how will it sound?

In this article, we’ll cover the causes of steel string rust and corrosion, how to remove it, and how to prevent it. We’ll also provide tips on keeping your strings in good condition. So whether you are a seasons musician or a new player, this post is for you. Contents
1. What is rust?
2. What is tarnish?
3. Causes of guitar sting tarnish
4. Can you play the guitar with rusty strings?
5. Can rusty guitar strings give you unique, interesting sounds?
6. How to prevent guitar strings from rusting?
7. Frequently asked questions (FAQ)
8. Conclusion

Rust is the name for the red iron oxides that form when iron-based metals oxidize. Rust occurs on guitar strings when the tarnishing is left untreated. Corrosion of iron or iron compounds is the only kind of rust. Thus, steel is susceptible to rust. Nickel and copper, for example, never oxidize or rust. When it comes to guitar strings, iron is the only metal that rusts, while nickel and copper both tarnish.

Tarnish will appear on guitar strings before rust. This is particularly true for electric guitars, which often employ metal strings. Steel-core wires coated with nickel or copper prevent immediate rusting but tarnish instead.

Corrosion on strings is often described as “tarnish” or “rust”. In most cases, the cost of replacing the strings is less than the supplies required to keep them from rusting. Stopping tarnish from forming in the first place is preferable to attempt to repair the damage that has already occurred. But the instrument’s tone will worsen if you don’t care about tarnished strings. It’ll make them brittle and rusty in no time.

The presence of moisture is the primary and most typical cause of tarnishing. This is because the strings come into contact with moisture from the air around your instrument or your sweat and oil glands. Some strings have a core wrapped in either nickel or copper wire, where moisture might get trapped. So, over time, they get crusts of stain, moisture, and dirt stuck in them.

If you need some new steel strings for your electric guitar, check out these top rated options below. 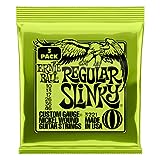 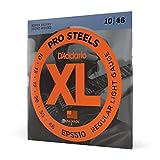 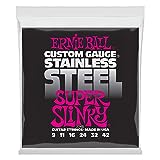 Can you play the guitar with rusty strings?

Even though you could play guitar with rusty strings and get some interesting sounds and textures, you shouldn’t. If your strings are rusty, your instrument is more likely to sound bad, have an uneven tone, or even break in the middle of a song, which could cut your fingers.

However, with a thorough cleaning, tarnished, discolored, or unclean strings may be brought back to life. It is best to wait to play until you properly care for your instrument. Thus, familiarity with the distinction is essential.

Can rusty guitar strings give you unique, interesting sounds?

Old and rusty strings may provide an unusual sound, but it’s not worth the risk to your fingers. Without waiting for your guitar strings to wear out, there are a few techniques to get new and interesting tones.

Trying out new tunings is a fun way to experiment musically. Do some research on slap guitar or steel slide techniques. If you change the size of your pick or switch out heavy strings for lighter ones, you might get different results. A rusty stringed instrument won’t be of much use there. Imagine a rusty old automobile; it may seem like it has character, but it doesn’t operate nearly as well.

How to prevent guitar strings from rusting?

The only way to prevent tarnishing and eventually rust is to consistently clean your strings. If you dont keep up with maintenance, rust or tarnish will set in, and tension will cause it to break. Here are some techniques to keep your guitar strings playing much longer.

1. Wash your hand before and after you play.

Oils and grime cause rusty strings, so It goes without saying that before you touch a guitar string, you should always wash your hands. Your fingers are always moving and touching things. What you just touched will undoubtedly end up on your guitar string. You should do more than clean your hands and play your guitar after eating a bag of Doritos, for example. It has to be washed with soapy water.

Sweat on the guitar strings may be reduced by wiping them after each play. Also, cleaning it once in a while can help get rid of any moisture that gets stuck in the strings. Finally, since the string is constantly dry, it won’t rust as quickly.

3. Storing it when not played

The strings on your guitar may be preserved by storing it in its hard case, even if you live in a humid climate. With its help, your guitar string won’t break from the dampness of where it is kept.

If you want even more tips and insights, watch this video called “How Much Do Rusty, Old Strings Affect Tone?” from The Trogly’s Guitar Show YouTube channel.

Do you still have questions? Below are some of the most commonly asked questions about whether you can play the guitar with rusty strings.

Metal strings will rust much like any other metal. The rusting process is greatly aided by moisture, such as the sweat on your palms (and perhaps your deeply full brow). Corrosion on a string dampens its vibrations, and hence it is sound.

Should you change rusted guitar strings?

Yes. With each performance, sweat, grease, filth, and grime build up on the guitar strings. If you can see rust or a big change in color on the strings, they will break sooner rather than later.

How long do guitar strings take to rust?

If you play your strings like the typical person, they could last you 90 days (about three months). This, of course depends greatly on your maintenance procedures.

To sum everything up, keeping your strings in good condition helps keep the sound quality of your guitar in tune. For this reason, it’s always advisable to clean the strings regularly. If you notice any rust on the strings or corrosion on them, then it is time for a replacement. In case you do not feel like cleaning and replacing the strings, buy new ones.

This article covered why guitar strings rust and how you can prevent your string from rusting. Here are some key takeaways:

So, how often do you replace your strings? And did I cover everything you wanted to know? Let me know in the comments section below (I read and reply to every comment). If you found this article helpful, check out my full blog for more tips and tricks on music production. Thanks for reading, and never stop making music.